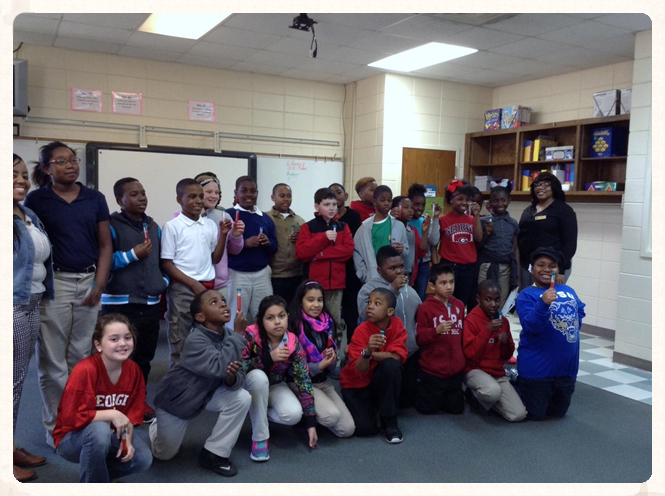 Deoxyribonucleic acid, or DNA, is a molecule that encodes the genetic instructions responsible for the development of all known living organisms and some viruses.  Once DNA is extracted, it can be studied by scientists, or even genetically altered.

During the start of the event, Oglesby and Norris explained to young people that their individual DNA made them unique, and helped them to look different from their classmates.  The showed them a double-helix structure of DNA that they brought to the classroom.

“We told students that the difference between two people has to do with their DNA, for example, you may have brown eyes, and your classmate may have blue eyes,” Oglesby said. “You can have curly hair, while another girl has straight hair. Having them learn about those differences was the kind of them to get them interested into science.”

Dr. Sarwan Dhir, director of FVSU’s Center for Biotechnology, said that the researchers have several goals when working with students.

“The main intent is to inspire students at a younger and younger age to appreciate the sciences, expand their opportunities to explore careers and keep their love of science and math,” Dhir said. “I feel that it is important to let the students know that scientists are everyday people and to show young people that what scientists do is something that is accessible to them. It takes their understanding of science to another level. It piques their interest to further their study of science.”

After talking about how DNA gives them their individual characteristics, Norris and Oglesby later wowed students by giving them a simplified, hands-on demonstration where they performed a DNA extraction using household items.

“We showed a technique of extracting DNA from a banana and a strawberry using household items that will allow the students to do it at home, as well,” Norris said.

In their demonstration, they used simple materials to perform their DNA extraction that included fruit, regular shampoo, salt, alcohol and distilled water.

“We explained to them that we can run a test on the DNA we extracted,” Norris said. After the demonstration ended, Oglesby and Norris answered the questions of future scientists inside the classroom. They also encouraged class counselors to make a special visit to the university’s  Center for biotechnology lab.

“The goal of the Center for Biotechnology, supported by multiple National Science Foundation funded grants is to help lead students into high-end, high demand jobs by providing them additional education and training through partnerships with the college,” Dhir said.  “Demonstrations, like this one, and giving the students a hands-on talk about DNA and cells, helps young people to see that this kind of research isn’t done by a scientists in an ivory tower.  DNA extracting is really something they can do – that they can experiment with and be active in. It also helps them to think about science.”
Dhir continued, “We want children throughout Georgia to know that science is fun, science is for everyone, and that they can make a difference in the world through a career in science.”
For more information, contact the Center for Biotechnology at (478) 825-6887.