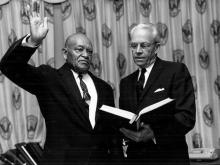 Austin T. Walden, a graduate of Fort Valley High and Industrial School, was a renowned attorney, political broker and civil right champion that was sworn in as Georgia’s first African-American judge since the Reconstruction period. As an attorney, Walden argued court cases to help attain equal pay for black educators in the state of Georgia. He also litigated lawsuits that helped to desegregate the Atlanta public school system and the University of Georgia.

Walden, a Fort Valley native, was born on April 12, 1885 to former slaves Jennie Tomlin and Jeff Walden. As a teen, he attended FVHIS and was the sole graduate of the class of 1902. He matriculated to Atlanta University, where he earned his bachelor’s degree in 1907. Later, he received a L.L.B. degree from the University of Michigan’s Law School in 1911.

The civil rights attorney began practicing law in Macon the next year. He joined the Army in June 1917, and served as a captain and assistant judge advocate. He married Mary Ellen Denney of Baltimore, Md. on May 18, 1918, and had two daughters Jenelsie and Austella.

In Feb. 1919, he received an honorable discharge from the military and moved to Atlanta, where he founded the Gate City Bar Association for Black lawyers within the city. He served as legal counsel for Citizens Trust Company, Mutual Federal Savings and Loan, and The National Baptist Convention, U.S.A.

Walden also chaired several community organizations that included the Butler Street YMCA, the Atlanta University Alumni Association and Atlanta Branch of the National Association for the Advancement of Colored People.

Walden entered politics and used his political influence to increase the rate of black voting within the city of Atlanta. As a result, significant progress was made in local black communities. His role in the city eventually earned him an appointment to the Atlanta city executive committee in 1953. He was one of the first of two blacks to serve on the Democratic executive committee (although Walden began his political life as a Republican).

In 1963, he was appointed a municipal judge in Atlanta by Mayor Ivan Allen Jr., becoming the city’s first black judge since the Reconstruction period. Walden died on July 2, 1965.