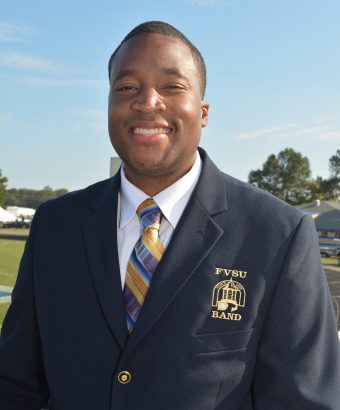 Jonathan Thompson, a native of Memphis, Tennessee, serves as the Director of Bands and Lecturer in the Department of Visual and Performing Arts and Media Studies at Fort Valley State University. Mr. Thompson is also a member of the Faculty Senate at FVSU.  Prior to his appointment at
Fort Valley State University, Mr. Thompson served 10 years in the public schools as a high school and middle school band director. During his public school tenure, Mr. Thompson’s middle school and high school bands received several years of consecutive superior and excellent ratings at concert and marching band competitions and festivals.  His bands have performed for audiences such as the Mardi Gras parades, the Children’s Healthcare of Atlanta parade, and other performances throughout the United States of America.  He is a member of the Music Educators National Conference, Georgia Music Educators Association, and Phi Beta Sigma Fraternity Incorporated.