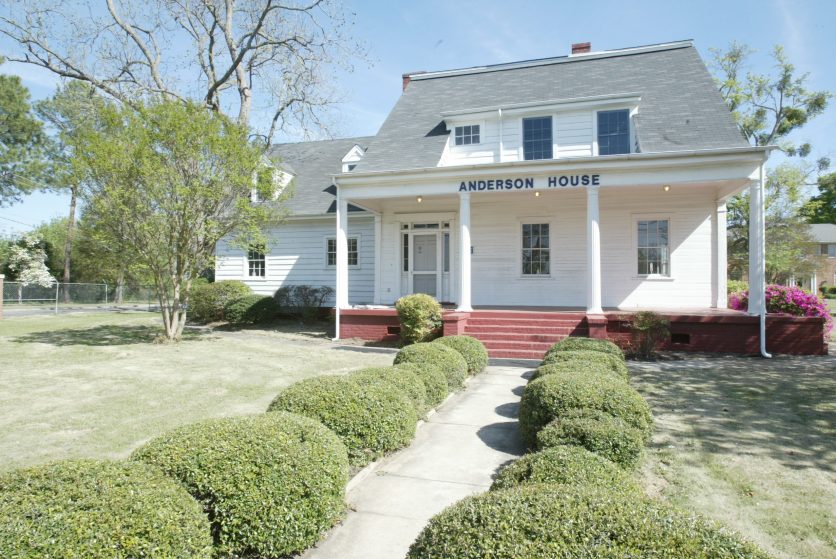 The Benjamin S. Anderson House was built in the late 1890’s and served as the residence of F. W. Gano, one of the founders of Fort Valley High and Industrial School, before later being sold to the school. It is the oldest building on campus and, despite its age, its architectural design captures the attention of campus visitors. The building is named as a tribute to Anderson, an agriculture instructor at Fort Valley State University for 25 years in the mid-twentieth century.

This colonial Dutch revival style was a popular architectural one for rural cottages of that era. The house was initially renovated around 1918 and served as the family home of Principal H. A. Hunt, Sr.; President Horace Mann Bond; and President Cornelius Vanderbilt Troup. Bond’s son Julian lived in the house as a child before becoming a civil rights icon as the founding president of the Southern Poverty Law Center, a founder of the Georgia Legislative Black Caucus and Student Nonviolent Coordinating Committee (SNCC), and later national chairman of the NAACP. During Horace Bond’s tenure, the house hosted scholars and celebrities among the most notable African-Americans of their time, including Dr. W.E.B. DuBois and Paul Robeson, a star of the Harlem Renaissance.

Since its original 1966 renovation, the building has provided office space for numerous institutional services. Some have been:  the Office of Alumni Affairs; the Life Center; the Office of Continuing Education; Talent Search; the Office of Financial Aid; the Office of Cooperative Extension; Honor House for female students; the Credit Union; and the Welcome Center. It presently houses the campus Heritage Museum and the historic Biggs Collection. This total building displays in the rooms contain period furnishings, silver, glassware, china, quilts, linens, and civil war memorabilia, dating from 1860-1900. These items are from an antebellum home in Box Springs, Georgia which were bequeathed by the plantation owner to Mr. Biggs’ grandmother, who was a former slave. The Smithsonian Institution in Washington, D. C. sought the collection for its anthology display. However, Mr. Alphonso Biggs chose to donate the entire collection to Fort Valley State College in 1991. His gesture, in part, was due to the influence of his early school teachers.

Mr. Benjamin S. Anderson was born in Magnolia, Alabama, October 12, 1904. He graduated from Tuskegee Institute with a B. S. degree in Agriculture in 1938 and earned the M. S. degree from the University of Montana in 1948. He did further study at Pennsylvania State University.

Mr. Anderson was Special Supervisor and Assistant Agricultural Itinerant Teacher for the Division of Vocational Education, Georgia Department of Education. At Fort Valley State, he served as Instructor and Assistant Professor of Agriculture in the University System of Georgia. After twenty-five years of service at this institution, he retired December 31, 1969.

Mr. and Mrs. Anderson were very active members of Trinity Missionary Baptist Church in Fort Valley. She sang in the Choir and taught in the local school system, until her untimely death. He served as Assistant Superintendent, and Superintendent of the Sunday School. Mr. Anderson was a member of the Board of Trustees for Trinity. They had a son, named after him, who became a medical Doctor in Cartersville, Georgia.

“History for the Taking,” Athens Banner-Herald