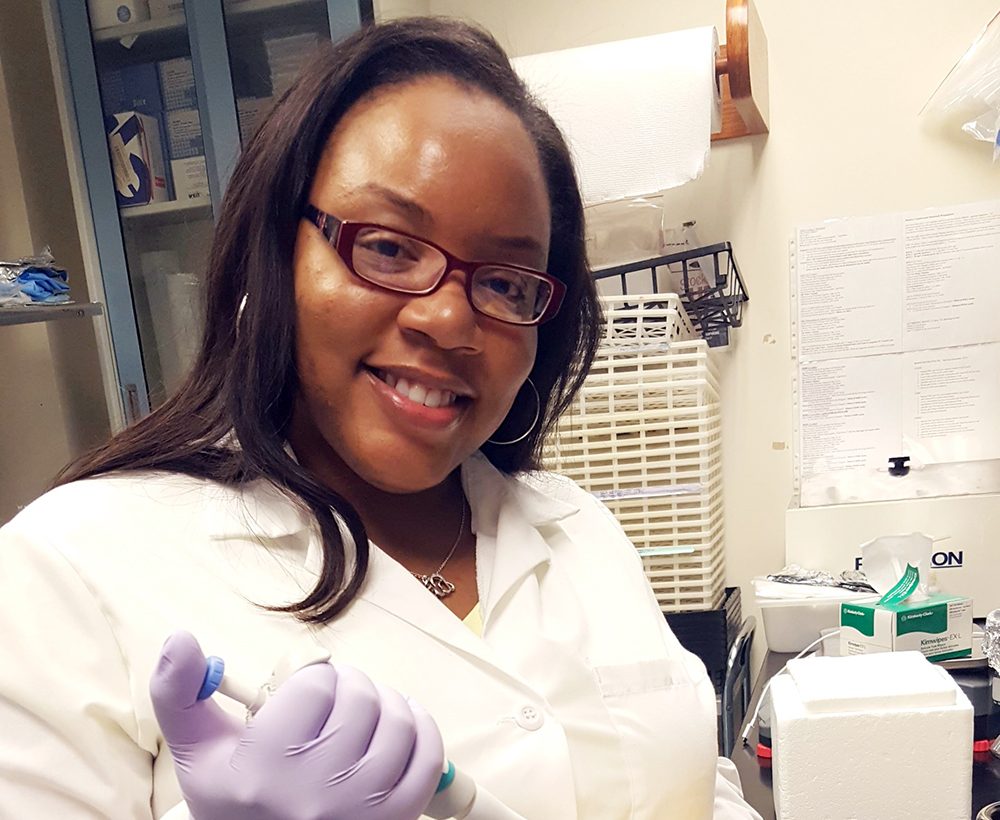 Lillian Oglesby, who graduated with a bachelor’s degree in plant science and minor in biotechnology, works the frontline at the USDA’s Agricultural Research Station located in Fort Pierce, Fla.

The 28-year-old conducts experiments on one of the most serious diseases affecting citrus plants, the Huanglongbing (HLB) disease, which translates as “Yellow Dragon Disease” in Mandarin Chinese. In the United States, the disease is known as the “Citrus Greening Disease.”

The HLB disease was first discovered in Florida in 2004. It is a bacterial disease transmitted by the Asian citrus psyllid (a brown aphid-sized insect). The bugs infect trees with a motile bacteria called Candidatus Liberibacter asiaticus. Within 18 months of infection, sick plants show mottled leaves with yellowing veins, premature defoliation, stunted growth. Trees die within five years. The fruit of HLB-affected trees is irregularly shaped, remains green at the bottom and tastes bitter. Currently, there is no cure.

By 2009, the disease reached epidemic proportions, spreading through Florida’s citrus producing counties. A study conducted by the Food and Resource Economics Department at the University of Florida estimates that the disease will cost farmers more than $331 million annually (or $1.66 billion spanning five years, representing 19 percent of the state’s average grower revenue).

At the USDA, Oglesby extracts metabolites from citrus plants to determine signs of HLB.  She has been researching the disease for the past eight months.

After graduating from Peach County High School, Oglesby  wanted a change of scenery. She enrolled at Stillman College in Tuscaloosa, Ala., where she majored in biology.

“I wanted to leave home and Fort Valley,” she said. “But the best for me was already here.”

When Oglesby returned to middle Georgia the summer of 2007, she decided to take a few courses at Fort Valley State. That is when she met Dr. Sarwan Dhir, director of FVSU’s Center of Biotechnology, who opened her eyes to the opportunities available for students within his program.

“He spoke about the plant science research they were conducting and the options available for students,” she said. “He told me how he could help me. If I came here, he could provide research opportunities and I would be able to make some extra money to help me stay in school. So, I decided to transfer to Fort Valley State.”

As an FVSU student, Oglesby worked as a lab technician, where she supervised and mentored summer interns. She conducted plant tissue cultures for research projects on the Valerian herb (a perennial flower plant that can act as an effective sleep agent), the Stevia plant (an herb used as a zero-calorie sweetener), and tobacco.

Besides on-campus research, Oglesby had several summer research opportunities. In 2008, she interned at Michigan State University, where she sequenced potato chromosomes. The following year, she interned at Monsanto Corporation, operating its vector quality control lab and analyzing DNA sequences.

“Depending on our career goals, we were able to meet research professionals at conferences and other universities,” Oglesby said. “We traveled to Puerto Rico, Washington, D.C., California, which we attend for free.”

In 2012, Oglesby enrolled at Florida A&M University, where she worked as a graduate research assistant at the Center for Viticulture and Small Fruit Research. She cloned genes from Muscadine grapes, and designed experimental procedures to analyze the gene expression of the Vitis species. Oglesby earned her master’s degree in plant science/molecular biology in 2014.

In 2014, she was hired as a research assistant on FVSU’s campus, teaching and preparing courses for the plant science undergraduates. In August 2015, she was hired by USDA’s Natural Resource Conservation Service as a soil conservationalist, where she worked with farmers.

Oglesby advises students, “Know where you want to go, and go for it. Make a plan and excel. There are many people who make goals, but they don’t usually accomplish them. In order to excel, you must plan, focus and never give up.”

“I am grateful to Dr. Dhir, because he didn’t just bring me into the plant science program, but he guided me,” Oglesby said. “Because of his recommendations, I was able to attend graduate school and I have had many job opportunities. I know that I am blessed because of his favor.”