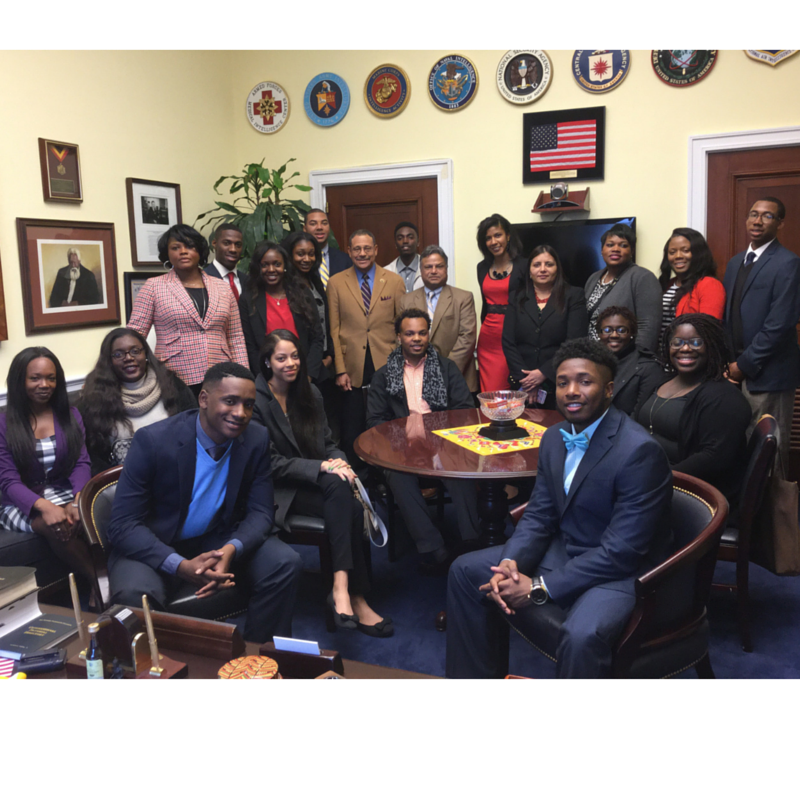 March 11, 2016 – For 17 Fort Valley State University students majoring in biology and biotechnology, a day in the classroom ended with plane tickets and an all-expenses-paid trip to Washington, D.C. to attend one of the top scientific conferences in the United States for under-represented students. The students attended the Emerging Researchers National Conference in Science, Technology, Engineering and Mathematics from Feb. 26- Feb. 28.

“It was definitely one of the best experience I had in college,” said Shannon James, a graduating senior that delivered a poster presentation at the conference. “I wished I could have started attending conferences like this one in my sophomore year.”

The ERN conference is sponsored by the American Association for the Advancement of Science, the Education and Human Resources Program, and the National Science Foundation Division of Human Resource Development.

For some FVSU students, like 18-year-old freshman Bacari Harris, it was their first time attending a scientific research conference. The plant science/biotechnology student received a $2,000 National Science Foundation Scholarship.

“It was my first time in Washington, D.C., and going to a different place,” the Fort Valley native said. “It made me feel like a grown up.”

Harris said after they reached D.C. and checked into their hotels, they traveled to Congressman Sanford Bishop’s office where the elected leader spoke to students about their career goals and aspirations.

“I liked how he welcomed us with open arms,” Harris said. “He provided us with food and drink, and it felt like were were at home.”

Another student that made the journey with Harris was Evelyn Smith, a 23-year-old who plans to become a zoologist in the future.

“When we met Congressman Bishop, he was really interested in us as individuals, and wanted to know what county we were from, and what our majors were,” she said. “When I told him that I was interested in becoming a zoologist, he told me about the University of Georgia and FVSU’s animal science program. He also told me about the Atlanta Zoo, but when he found out that there was a zoo in Madison, he really found it interesting.” The post baccalaureate student currently volunteers at the Macon Museum of Arts and Science where they have tamarind monkeys, cockatoos, parrots and possums.

In addition to meeting the Congressman, students were able to listen to scientific talks about research, including one on drones that could be controlled with the mind. Students also networked with graduate schools and presented research they conducted.

James, who presented a poster presentation said she worked in the summer of 2015 with Seema Dhir, an assistant professor of biology at FVSU, to analyze animal hairs of cats, rats, mice, deer and hamsters under a comparison microscope.

She presented her findings during at the conference in her poster presentation entitled, “Animal Hair Analysis using Microscopic Techniques for the Forensic Assessment of Individual Identification Characteristics.”

“The setup for the poster presentations was in a big ballroom, and there were old-school billboard types set up, and we pinned our posters to it,” James said. The student said that she was among 1,000 students within the ballroom. “Everyone had their own board, and we had peers and judges that came through in 30 minute increments. There were five judges total that looked at posters and I gave a summation about what I did, as they asked me different questions.”

James believes all students majoring in the science should take the opportunity to go to a research conference. She said they should find a mentor early.

“Although I didn’t place, I think I presented my information well and successfully,” James said.

“I would definitely say find at the least one or two professors that are in your major and really stay with them,” James said. “Be the teacher’s pet, because they will bring you so many opportunities. The mistake I made was waiting so late in my junior and senior to get a mentor, before I knew what path I wanted to take. Start early and get to know your professors well.”