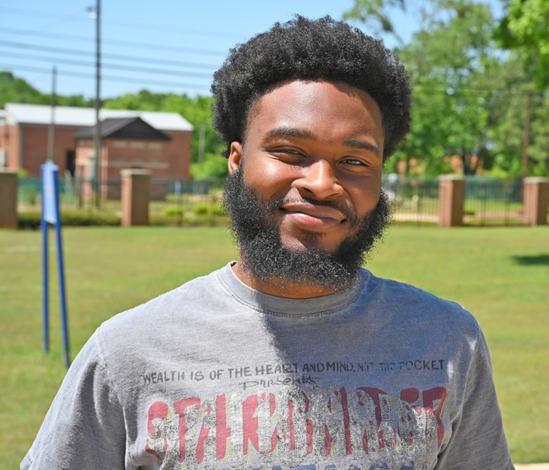 Fort Valley State University is holding its 2022 Spring Commencement Ceremony on May 14. One of the many graduates earning a diploma will be Dartavious Pearson.

Pearson, 24, a native of Dadeville, Alabama, is graduating with a degree in family and consumer sciences with an emphasis in food and nutrition.

His matriculation to FVSU began with an athletic twist on a recruitment trip with two of his coaches who wanted him and his teammates to advance to college.

“We visited with the football coach, looked at the facilities around the school, and thought the environment was cool. I knew I wanted to play football if given the opportunity. Once the visit was over, I felt this was the best spot for me to play football and get an education,” Pearson said. He eventually played for two seasons, and helped the Wildcats win the Southern Intercollegiate Conference title his freshman year.

Like many college students, Pearson had to discover his passion which caused him to change his major to something closely aligned with his interests and future goals.

“I originally was an animal science major, but after looking around at the other majors, food and nutrition really fit in because I loved sports and wanted to stay in that area,” Pearson said. “I wanted to take the sports dietician route, stay active and learn about the food I would need to eat as an athlete. That influenced my decision to stay in food and nutrition,” the Alabama native said.

While growing up, Pearson said that he was around the kitchen but seldom cooked. All of that changed when he arrived at FVSU. Remembering how his mother prepared meals, he improved his culinary skills using the kitchen in his dormitory. “When I would run into a problem, I would call her on the phone and ask, ‘Am I doing this right?’ In the end, it all worked out,” he said with a laugh.

Additionally, Pearson said that being part of the Historically Black Colleges and Universities (HBCU) experience at FVSU made him feel like he was connected to a family. He also appreciated the class sizes at the university. “Your classes are a lot smaller than that of bigger schools. You get more of a relationship with your peers and teachers, and that’s a big plus,” said the food and nutrition major.

Moreover, Pearson said he would advise future students interested in the food and nutrition major, to do what your heart tells you first. “It takes a lot of hard work, a lot of studying, and it is strenuous when it comes to science courses. Just stay the course no matter how hard it may be. Just keep working, and you’ll get to where you’re trying to go,” said the future FVSU alumnus.

After graduation, Pearson plans to work for his alma mater as a full-time videographer and photographer. “Even though the position is outside the realm of my major, it helped me get to this point,” Pearson said.

Furthermore, Pearson said he’ll be ecstatic after crossing the stage and receiving his diploma. “In all honesty, it will feel like a breath of fresh air. When I first got here, things did not go the way I planned with sports, so I had to switch lanes as a student. I’ll also be turning a hobby (videography) into a career after graduation. It’s a big relief,” said the former football player. His future plans include going to graduate school and majoring in digital social media and communications.

Even though he’ll be focusing his efforts on his new full-time job, Pearson still plans to use his food and nutrition degree. He hopes to eventually own a restaurant. “The restaurant I plan to open will have a soul food theme with a bit of Harlem in it. People will be able to sit down, listen to music and enjoy a good meal,” he said.