Every student who comes to Fort Valley State enters the gates with their own unique story. But for FVSU graduate Zaquan Baldwin, humble beginnings would not stop him from achieving greatness. Through hard work and dedication, he turned tough times into triumph, becoming a star athlete and scholar graduate.

Baldwin grew up in the Bloomfield housing projects of Macon, Georgia. As a child, he was raised by a single mother. The family did not have a lot of money and struggled. For this reason, he turned to the streets and gangs to find answers.

“Growing up in a low socioeconomic area affected me a lot,” Baldwin said.  “I grew up thinking gang life was the only thing out there for me to survive.”

By the age of 14, Baldwin was heavily involved in street activities. He would find himself in and out of juvenile detention centers for a long period of time.

As Baldwin transitioned to high school, he found peace and refuge on the gridiron playing football. Even though he still found himself in bad company from time to time, he knew his high school coaches and friends would not give up on him.

“Throughout my years of high school, I was very hostile, but my high school did not give up on me,” Baldwin said. “During my 10th grade year, I was very disrespectful to my parents which caused me to become homeless.” 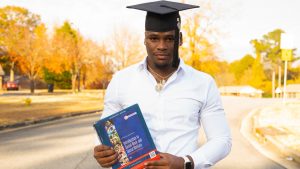 After this, Baldwin knew he needed to make some changes in his life. In desperate need of adjustment, Baldwin started networking and reaching out to anybody who would try to help him. He knew the way he was living would lead him down a dark path. Therefore, he would try to branch out and find positive ways to express himself.

By the time Baldwin was in the 11th grade, he began to find stability. While staying with a football teammate, he was given leadership roles in JROTC and on the football team.

Things started coming together for Baldwin towards his senior year. He reunited with his father and moved in with him. He began to have a better attitude and work harder in school. As the end of his high school career quickly approached, Baldwin was not sure where to turn afterwards.

“I never thought about college or the military until I was frequently asked ‘what’s next?’ I didn’t know what I was going to do until I got a call from Fort Valley State’s coaches to come for a visit. Once I came to campus, I knew Fort Valley was where I wanted to be.”

Baldwin continued to work hard on the field and in the classroom; however, as he brought his son into the world, he found himself at a crossroads.

“Due to my son being born, I thought I would have to quit football and work to support the needs of my family,” Baldwin said. “FVSU supported me 100 percent by helping me get all the scholarships and grants available for me.”

Baldwin had to miss a lot of workouts and practice time due to caring for his son. But he would not let it stop him from completing his goals. Because of his good study habits and natural talent on the field, he succeeded both on the gridiron and in the classroom. His hard work would pay off as he was named a First Team ALL-SIAC defensive end and finished school with consecutive 4.0 GPA semesters.

Baldwin’s journey shows a story of determination, hope, and growth. He says he hopes to inspire others to chase their dreams and let them know that they can succeed no matter what circumstances they may come from.

“I want people to learn that through faith and will, you can do anything that you put your mind to. It doesn’t matter what you are going through. If your effort is top tier, you can make it.”

Baldwin would like to give a special thanks to his old high school principal Bernard Young and FVSU alum Jeffrey Parlor and mentor Gerry Plant.