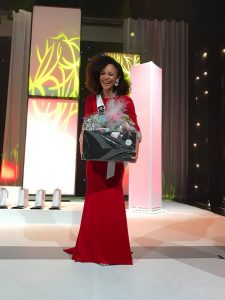 “I have every intention to promote unity in our country by focusing on our differences.”

If there was ever a student who bleeds blue and gold, it is Keila Outen. The term “well rounded” could have been invented to describe the psychology major from Puerto Rico, who has seized every opportunity for growth and excellence since she stepped foot on FVSU’s campus as a transfer student by being active in a dizzying array of clubs and organizations. She is a member of the Wildcat Battalion Army ROTC unit, sprinted for the FVSU track team, and sings in the Voices of Faith Choir and the Wildcat Force group that helps recruit students. Her multi-faceted accomplishments helped her land the 100 Women in Gold Scholarship and be selected as Miss Black and Gold 2016-17. She was a finalist in November 2017’s Miss Georgia USA pageant,  where she was chosen as Miss Congeniality by the other contestants for her uplifting spirit and warm personality.

Outen competed in the Miss Georgia USA pageant for one simple reason. She thinks she can help bring about unity as a living testament to pride, confidence, and resiliency. “I [entered] the pageant as an Afro-Latina woman, with a motive to change the way we look at culture and diversity, so that it isn’t looked as a deficiency but rather strength,” she says. “With my platform, ‘There is Beauty in Unity,’ I have every intention to promote unity in our country by focusing on our differences.”

She is guided by a quote from peace activist Maulana Wahiduddin Khan, “In this world, unity is achievable only by learning to unite in spite of differences, rather than insisting on unity without differences.”

When asked why she chose to attend FVSU, Outen flips the script. “Fort Valley chose me!” she says. She was frustrated at another school and felt she couldn’t progress in her aspirations to serve her country through a military career despite being at the top of her class. She was looking for a school that would help her get to where she wanted to go, when her instructor, Major Williams, told her in no uncertain terms, “you are going to my alma mater, Fort Valley State University.”

“If it wasn’t for the love Major Williams has for FVSU, I wouldn’t be here today,” Outen explains. “He saw something in me no one else could see. He saw a Wildcat. I knew, [if accepted], I would flourish here and take pride in MY FVSU, and I have.” Now, she says, she is on the road to the military career she’s dreamed of.

The pressure of competing to become Miss Georgia USA came second nature to Outen, who grew up as the oldest of eight children in her family. “I’ve always tried to set the bar as high as possible so that my siblings had no choice but to be great,” she says. Her goals include graduating from FVSU, becoming a second lieutenant in the U.S. Army, and eventually obtaining a master’s degree in children’s mental health and working with children on the autism spectrum. Her rationale for her confidence in her potential to impact the world comes down to her beliefs.

“God has a plan and a purpose,” she says. “I may not see it right now, but I know if I walk by faith, doors will open.”